The Society of Wildlife Artists asked me to create an award for Robert Gillmor, which was  a great honour.  Way back in 1999 Robert presented me the British Birds ‘Bird illustrator of the year’ award and so it felt in a way that the wheel had turned full circle.

For a few years now I have been making ceramics decorated with birds and I decided to incorporate one these designs into the award. I generally throw open bowl shapes as these lend themselves well to decoration. I often construct pieces which make you want to turn them around in your hands with the birds running in a circle. The addition of text around the rim of the bowl adds to this feeling of movement.

Anyone who has ever received a letter from Robert or had a book signed by him will know that he produces beautiful calligraphy so no pressure there then! I chose Bodoni Bold as the typeface and probably spent more time carefully blocking in the text with blue pencil than in executing the whole of the rest of the design. It’s pretty well impossible to trace onto a curved surface so in the end I just had to take a deep breath and go for it.

When I think of ‘Robert’s birds’ I immediately see waders and of course avocets and so the interlocking circle of oystercatchers, lapwing and avocet fell into place. I thought it was important to include the SWLA logo which Robert designed and the zebra’s eye is pretty well smack in the middle of the circle.

I threw the bowl in white stoneware which has a bit of porcelain in the mix as I wanted a nice white ground. The first, or biscuit firing was at 1000 C then the design was painted on with CONTEM underglaze colours. These change in the second firing so it’s important to remember to fire a few test pieces first. Two coats of transparent clear glaze are followed by the final firing at 1250 C.

When you think about the violence of heating clay up to such enormous temperatures it’s  a miracle that it survives to become a solid durable object. All sorts of things can go wrong. in the firing. Any air bubbles trapped in the clay can expand and the bowl can literally explode. Suffice to say it was a huge relief when the award emerged unscathed out of the kiln.

It was a joy to make and I hope I’ve done Robert justice. 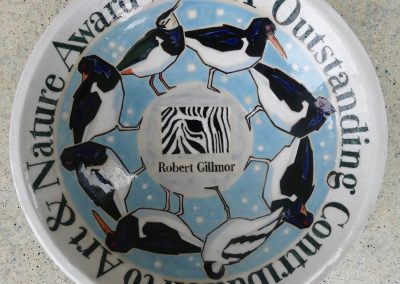 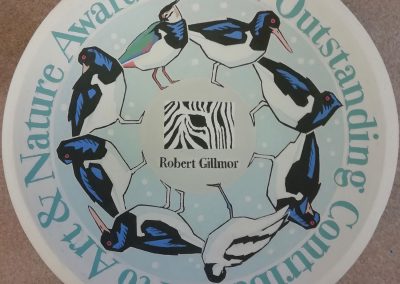 After the first firing 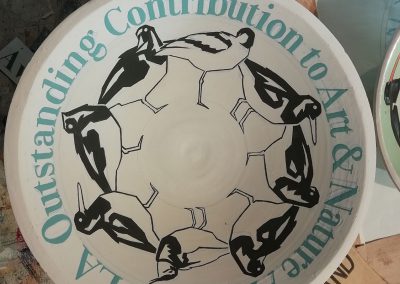 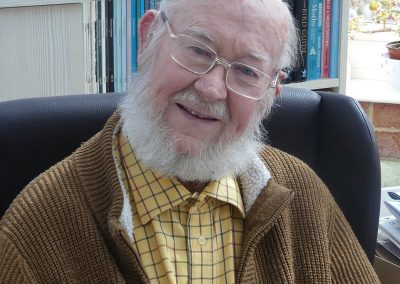 Robert Gillmor with his award