Spending a couple of weeks at a luxury hotel in the Caribbean painting a mural sounds like a dream commission and in many ways it was.

In 2017 I illustrated a nature guide for the EastWinds Hotel in St Lucia and when the owners decided to re vamp the entrance to the property with a mural they asked me back to the island in January 2019 to work on the commission.

The space measured roughly four metres by three metres which was a big area to cover. I had painted at this scale once before for the Wildscreen exhibition in Bristol but working outdoors in tropical heat to a tight deadline was a new challenge. Normally I would have used acrylic paints but it was impossible to either bring them with me or source them on the island so we I had to use exterior household emulsion which mixes in different and suprising ways from conventional artists paint! A top coat of acrylic varnish with a UV filter protected the final work from the blazing Caribbean sun.

I worked in the mornings and evenings avoiding the midday heat and completed the mural in ten days.  Not wanting to leave too much to chance I brought with me a one tenth scale colour design which we managed to project onto the wall after dark and trace off the image. The brief was to include the beach along with colourful plants and birds visible from the grounds of the hotel and complete the work there just enough time for a trip up into the rainforest to see the endemic St Lucia Amazon parrot before the flight home.

I was pleased to see that I managed to convince one of the local bananaquits that a huge rival bird had miraculously appeared in its territory as it started noisily displaying in front of the mural – I do hope it has got used to the outsized intruder by now. 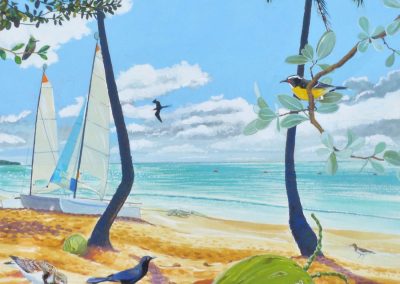 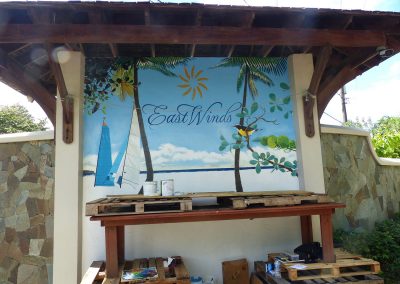 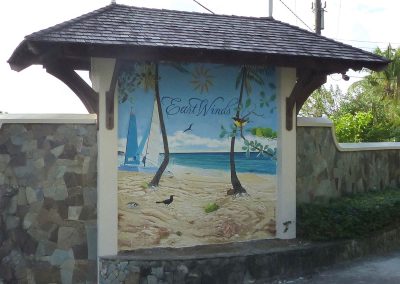 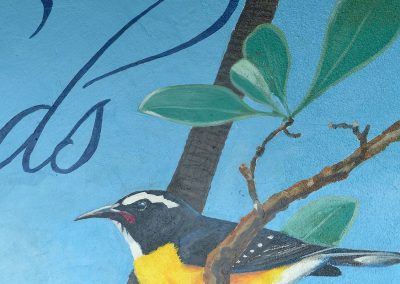 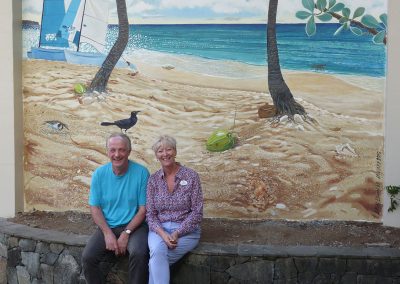 In front of the finished work with hotel manager Judith Milne

Note the carib grackle sitting on my head!