Artists for Nature Foundation – Bringing the Dead Sea to Life

In March 2017 I took part in a eleven day field trip to Israel and Jordan with over twenty brilliant international artists, writers and musicians. The purpose of the trip was to publicise the perilous state of the Dead Sea, the lowest place on earth which is rapidly drying up as a result of human activity such as extraction, industry and of course climate change. The Dead Sea basin is home to species found nowhere else on the planet and is a vital staging post for birds on their migration along the African rift valley into Europe and back.

My memories of the trip remain vivid today as were were bussed through some amazing landscapes of staggery beauty. Arid deserts, fertile wadis and the extraordinary Dead Sea itself provided an overload of artistic inspiration and I still have a head full of images some of which might never get committed to canvas. But here are some of the paintings I managed to complete on the trip and back in the studio on my return. 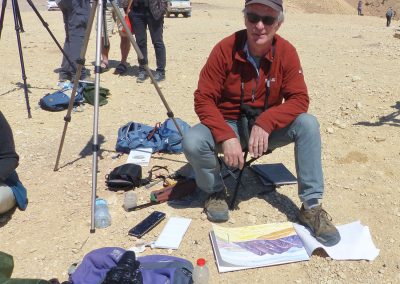 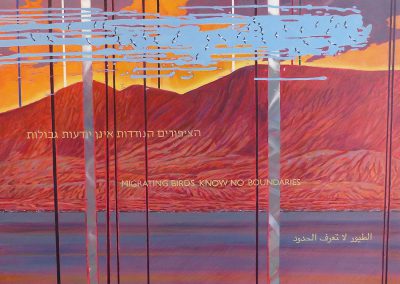 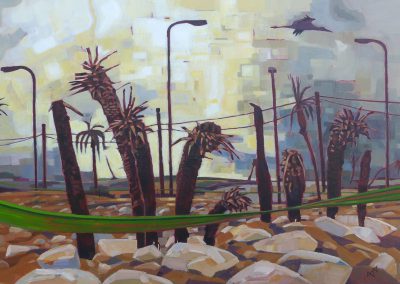 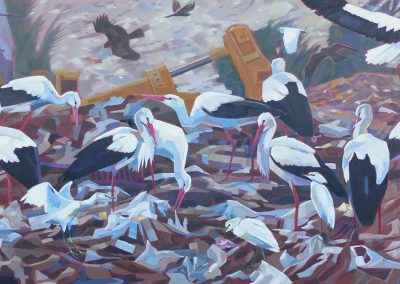 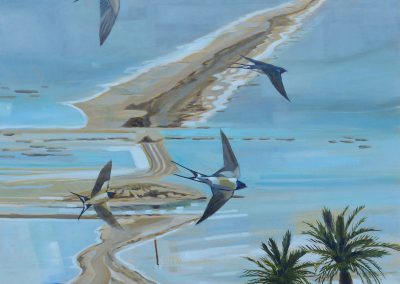 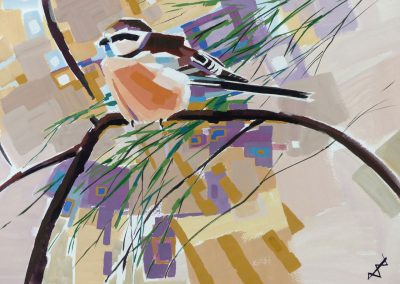 1 The artist abroad, watching white stork migration. Note like most good Brits at least three layers of clothing worn at all times, even in the stifling desert heat.

2 Professor Yossi Leshem at the Department of Zoology at Tel Aiv University who organised the trip to the Dead Sea has a saying – “Migrating Birds know no boundaries” In my painting the vertical stripes derived from the colours of the flags of the region form a political barrier for the safe passage of the migrating storks. People of many nations and religions must come together with a common purpose to safeguard our natural environment. The English, Hebrew and Arabic script represents that hoped for co-operation.

3 Dead Dead Sea date Palms at Ein Gedi, Israel. I was very taken with these stately palms on the shore of the Dead Sea. The evaporating waters had opened up sink holes in the soil, exposing their roots, drying them out an eventually killing them. The lamp posts and threatening sky add to the sense of foreboding.

4 Storks on a rubbish trip. We were up early on the first morning in Israel for a trip to the local tip. I will never forget the sight (and smell) of hundreds of storks, egrets and kites picking their way through the piles of refuse in the steam and heat.

5 On our way south to Eilat we passed vast salt evaporation ponds with Tristam’s grackles and swallows completing the picture.